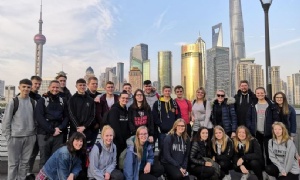 On what was a cold grey morning on the 5th of April, 26 students and staff from the Emmbrook School embarked on a 10-day tour of China. Visiting 4 cities, over 26 attractions and historical sites, travelling on 6 planes, one train, 3 coaches and a tube and eating over 15 different variations of Chinese food – it was a jam-packed, non-stop tour and an amazing trip. 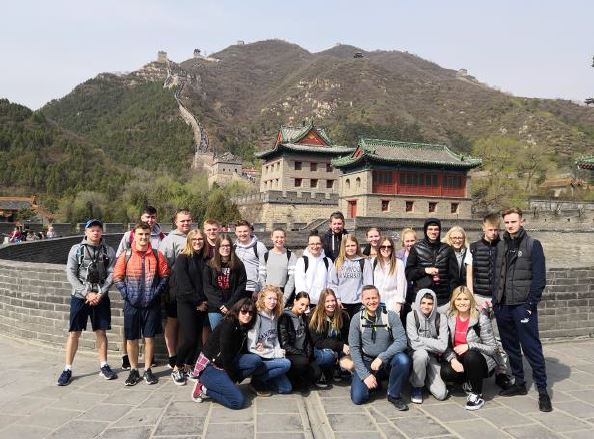 Our first stop was the ‘Political capital’ of China, Beijing. The capital of China and one of the oldest cities in the world, Beijing sits in the North and was the best place to start our trip. With essentially 2 and half days to explore Beijing we saw as much as possible, including 4 world heritage sites. We began with the Olympic stadium, a huge structure decorated to portray a bird nest- it was hard to miss. Next was Tiananmen square, one of the largest urban public spaces in the world, and it sure felt like it. Swarmed with  visitors it was hard to admire the square, but we soon found ourselves bustled into the ‘forbidden city’ (one of the world heritage sites) at one end, which itself is over 961m long. What we discovered was a variety of beautifully decorated and colourful buildings all with unique pieces of history and meaning. The second day was packed with visits to the Great Wall – which is much steeper than you think – entailing a 40-minute climb of over 200 steps (and that wasn’t even the very top)! Exhausted but enthralled we next visited a jade factory, learning the old traditions and the meanings behind different carvings of jade. Finishing our day off with a trip to the Ming tombs – a collection of burial sites built for the emperors during the Ming dynasty - and a pearl factory where we learnt about the different types of pearl (plus we got to do a bit of shopping)! 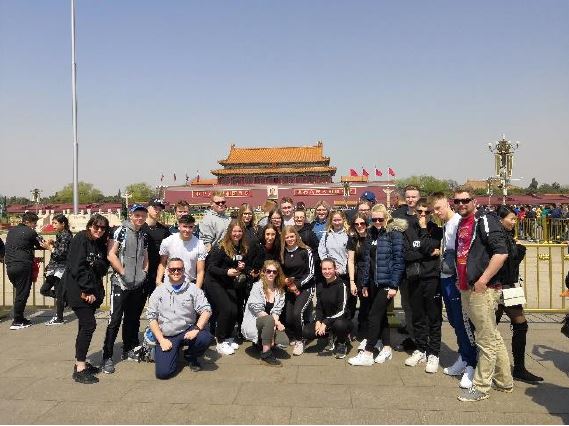 Finally, on what was a slightly rainy and cold last day in Beijing we visited the gorgeous summer palace (ironically in the rain) which is home to one of the largest gallery corridors in the world measuring at 728 meters. To finish our Beijing tour, we visited the Temple of Heaven and after boarding a high-speed train  which would take 5 hours, we were next on our way to the ‘Culture Capital’ of China, Xi’an. Arriving late meant our first impression of Xi’an was that of night-time and whilst there are no huge differences to be noted between it and Beijing, it was slightly more ‘built up’ featuring more skyscrapers. Our drive took us to our hotel which is located in old town Xi’an – the part of Xi’an where it is against the law to build skyscrapers it is marked out by the ‘Wall of Xi’an’. The wall, which we were lucky enough to be able to cycle around the next day, is 13.75km long which would take about 4 hours to walk! We visited the wall after the amazing opportunity to visit the terracotta warriors. Discovered by farmers during the 1970’s, honestly the only way to appreciate the magnificence and truly amazing story of the warriors is to visit. Next, we visited the bell tower which marks the centre of old Xi’an and off of which spikes the 4 directional main roads of Xi’an. Our final stop in Xi’an was to watch a Tang Dynasty dancing show which showcased traditional Chinese dancing and included a variety of music and acts. The next morning, we left for our 9am plane to Shanghai, the ‘Economic capital’ of China. Shanghai was the most built up so far of the cities, including high skyscrapers and a bustling atmosphere it was amazing to witness the difference to our first stop in Beijing. The outskirts were filled with huge skyscrapers which we were promptly told were filled to the brim with apartments and houses. We began our tour of Shanghai with a trip to the Jade Buddha temple which showcases two huge buddhas made of jade which, the story tells, were being transported down the local river when the boat could not carry their heavy load any further so they were left in Shanghai and a temple was built for them. We next took a cruise along the Huangpu river and were able to clearly see the ‘financial district’ of Shanghai which features many old bank buildings compared to the other side of the river which is filled with modern glass buildings and offices. Finishing the evening with a walk along the bund and a visit to truly incredible acrobatics show we went to bed excited to explore the next day.

Our second and last day in Shanghai was filled with a visit to the Shanghai museum and to the beautiful Yu gardens, filled with pink and red flowers it was a hidden gem within a huge market which we thankfully were allowed some time to explore. We took a trip out of the city later in the day to visit the Volkswagen manufacturing plant to learn about the making of the cars and the huge production line including what must be 100’s of steps all to make one singular car. Next was a trip to an underground fakes market,
the best place to buy t-shirts and jumpers that appeared to be the expensive brands. We all left happy with our purchases which included fake Lego, fake trainers and fake air pods. Finally, we were treated to a trip up the Jin Mao tower which is one of the tallest
skyscrapers in Shanghai where we got a night view of Shanghai and wobbly legs if you looked out of the window for too long! Our final destination was Hong Kong which we soon learnt was much more westernised compared to our other stops. Hong Kong have separate laws to the rest of China know as ‘One country, two systems’ which basically allows free speech and the right to protest, this way of governing will remain till 2047 when the laws will be re-negotiated. One of the other differences we immediately
noticed was the humidity, think of 26° heat and then add rain. Nonetheless we pulled on our rain coats and started the trip by visiting yet another fake market. The next day we caught the metro to the Sky 100 tower, giving us an aerial view of Hong Kong and the harbour, before we then caught the metro to the ‘Avenue of Stars’ which instead gave us a walking view of the harbour and of the famous ‘Bruce Lee’ statue. Next was a ferry to Hong Kong island where we walked to catch the tram to Victoria Peak. Whilst the view from the peak, which is 552m above sea level, wasn’t very clear we enjoyed the tram ride and the experience. Finally we visited St John’s Cathedral which was built by the British before being surprised with our final meal in China at the ‘Hard Rock Café’ - it’s safe to say our spirits were lifted by the huge burgers that arrived at the table.

Embarking on our flights home was sad but before we knew it our 16 hours of travel were over and we were back home in England, exhausted but all of us thankful for such an amazing opportunity.
Belinda Bateman
Head Girl (2018-2019)