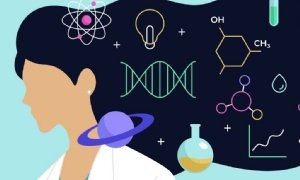 As I moved through the school, I had the opportunity to attend many STEM events ran by the school, be they trips or presentations from external speakers as it was known that where my interests lay, but I never saw myself in any of these speakers. Every time I would attend an event, I would see the same archetype repeatedly, until that was just what I expected to see. I expected to see the older private school male CEO of a research company who would tell me how hard it was to change from a private school to university, and very soon I started to associate those stem fields with privately educated old men, who pretend they had to fight to get to their position.  However, when I looked deeper into these stem fields, I found far more inspiring figures who I could relate to on a much deeper level. I found TedTalks from women who have worked for NASA and sent rovers to mars, I saw students who could talk for hours about their dissertation project on the heart and keep your interest and I saw people who knew what it felt like to be me, as they had been sat in my position and I found I could relate to them so much more, and my ideas around stem shifted as they had felt like the black sheep of the industry, and yet the most inspiring thing,

They didn’t let that hold them back.

So, I did more. I attended more lectures and went to more of these trips, because I had seen I could belong in this field, I had seen that there was room for me, but I still was met with resistance.

An experience I believe will stay with me and an experience that prompted me to push for this movement as much as I have, was from year twelve when I went to a math and philosophy open day at the University of Oxford with my further math class. I have never held much interest in studying math at degree level, but the opportunity to attend a taster day and have lectures from some of the best lecturers in their field was one I was not willing to give up. For some context six of us, from the Emmbrook school attended this lecture me and the five male members of the further math class that year. Now, I love Oxford so much, it is one of my favorite cities to visit in the UK and so like any eager student I arrived on the 7 am train and had breakfast before meeting the rest of the group and walking to the university's math building. When we arrived, it was painfully obvious that I was going to be one of very few women present that day, with one of the students helping with signing in going as far to say, “it is good to see girls actually bothered about math”. While at the time I bared the comment no thought it has played on my mind for quite a while as something about it doesn’t sit right with me, yet I am unable to figure out what.  this however wasn’t the only comment I received throughout the day, as a group we had befriended a student who was attending by himself, and he was the type of person you would expect to see at an oxford taster day. He made no great impression until the topic of collages came up, at oxford you are sorted into collages which become your family for your time at the university and, of course collages that were originally all female such as Lady Margrets Hall came up, and while all collages have been coeducation since 2008, he still had a very strong opinion about them. He claimed that getting into oxford as a woman is so much easier than being a man, as the collages are all looking to improve their statistics, so they will just take anyone.  I am sure it is not hard to see why I was offended, I mean first off, the statistics haven't shown an increase in female students in a while, and secondly of course, to imply that female students have it much easier and by conjunction implying that they do not belong in the university is such a degrading statement, that I found myself in shock at the time. We were no longer acquainted after that.

But it is a shame that I have to say it was not just the students who showed this sort of attitude. In our math and philosophy lecture we were encouraged to raise our hand and offer answers when prompted, which of course lead to inter-school competition for, of course, no prize but the satisfaction of beating another school. Our final problem was presented and was based around a group of pirates who had just won some gold and were looking for the best way to split it between them. There were many conditions and ultimately it led to a lot of thinking to work out the best solution to our problem.  When the lecturer called for any suggestions, I put my hand up, I knew this kind of problem and was confident in my answer and was more importantly ready to beat some other schools. To my disappointment however, I was ignored. The lecturer looked at me and then called again for someone else to answer the question. This charade went on a few more times before a male student sat at the back of the room put his hand up and, was called upon straight away.

I don’t think I can recall another time I have ever felt the way I did in that moment. The blatant disregard for me despite the lack of other options, it ultimately made me feel like I didn’t belong in that room, it made me feel like and outsider. But it also made me angry, why should it be that I must feel that way, what right did that lecturer have to make me feel that way and why did he choose to do it. That feeling of exclusion from a field of interest is something I want no other student to ever face, which is why we will support every student at the Emmbrook to achieve their goals, especially young women with interests in STEM because I don’t want to hear another story of an incredible scientist who changed her path because a man felt threatened and made her feel inferior.

Therefore, I have decided to put such a huge emphasis on this project within the school, I want to see external speakers who are young, female and those who took unconventional pathways and are still doing incredible things in their careers. I want to see students inspired by speakers and trips, and go on to work for NASA or Apple, without a second thought because they have had that empowerment and support from staff to know that they have a right to be in any field they want, and most importantly have the strength and courage to fight for their spot and be able to tell people that they are not going anywhere, because you have the right to learn any subject you wish and to do any job you wish, regardless of age, gender, race or sexuality.

You have a right to be there.